My Europe - Your Europe: Insights from the 'Outside' 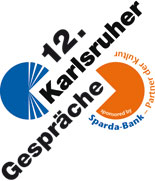 Conceptually complementing the 11th Karlsruhe Dialogues of 2007, the congress from 15-17 February 2008 once more pursues the question of how people with a different cultural background perceive Europe.

In the first, successful part in February 2007, we reflected on the European Union from the outside: only non-Europeans living outside of the EU were asked to give their insights about the role of Europe. They talked about their views and perceptions from different angles and backgrounds. For the second part in 2008, non-Europeans who have migrated to the EU will talk about their impressions and visions. The insights from within will be expressed by focusing on processes of change, responsibilities and duties inside of Europe. That way, the congresses in 2007 and 2008 display the contrast between the impressions from the outside and the inside. The 11th and 12th Karlsruhe Dialogues aspire to an intercultural dialogue that helps challenge our own personal and social myths and stereotypical eurocentrism in a way that complements the insights of Europeans themselves and invites debate.

Personalities from the fields of science, politics, and the arts will voice their opinions on concepts and practices of integration, attitudes towards cultural differences and plural societies, the development of and experience with parallel societies and legal pluralism.